During his 20-year run as president of UMBC, Dr. Hrabowski has transformed a young university into a research institution recognized as one of the most innovative in the country. His goal: continue building a campus that’s first-rate in research and instruction, and that prepares students of all backgrounds for success.

Dr. Freeman A. Hrabowski, President of UMBC (University of Maryland, Baltimore County) since 1992, is a consultant on science and math education to national agencies, universities, and school systems. He was named by President Obama to chair the President’s Advisory Commission on Educational Excellence for African Americans. He also chaired the National Academies’ committee that produced the report, Expanding Underrepresented Minority Participation: America’s Science and Technology Talent at the Crossroads (2011). His 2013 TED talk highlights the “Four Pillars of College Success in Science.”

Named one of the 100 Most Influential People in the World by TIME (2012) and one of America’s Best Leaders by U.S. News & World Report (2008), he also received TIAA-CREF’s Theodore M. Hesburgh Award for Leadership Excellence (2011), the Carnegie Corporation’s Academic Leadership Award (2011), and the Heinz Award (2012) for contributions to improving the “Human Condition.” More recently, he received the American Council on Education’s Lifetime Achievement Award (2018) and was named a recipient of the University of California, Berkeley’s Clark Kerr Award (2019). UMBC has been recognized as a model for inclusive excellence by such publications as U.S. News, which the past 10 years has recognized UMBC as a national leader in academic innovation and undergraduate teaching. Dr. Hrabowski’s most recent book, Holding Fast to Dreams: Empowering Youth from the Civil Rights Crusade to STEM Achievement, describes the events and experiences that played a central role in his development as an educator and leader.

4 Pillars of College Success in Science
Why Higher Education Matters

He was king and gracious to everyone he met. He was generous with his ideas and engaged the audience every minute he spoke. Well worth the investment of time and resources to have him on campus. I wish we would have had him longer. Thanks for all your help! 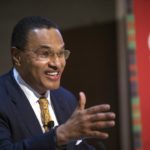 Freeman Hrabowski has a problem. The president of the University of Maryland, Baltimore County (UMBC), has been so successful at cultivating his school’s reputation for steering African-American students ... Read more 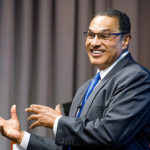 Getting through an advanced degree program in science is a bit like a long marriage: It takes commitment, the resolve to work through complex problems and sometimes help from outside sources. In America, only about ... Read more

Erin Gruwell has earned an award-winning reputation for her steadfast commitment to the future of education. Her impact as a change agent attracted Hollywood’s attention, and in 2007, Paramount Pictures released Freedom Writers, starring two-time Oscar winner Hilary Swank as Erin.