Writer & Producer of The Simpsons

Four-time Emmy winner Mike Reiss—who has worked on The Simpsons continuously since episode one in 1989—shares stories, scandals, and gossip about working with America’s most iconic cartoon family ever.

Mike Reiss has won four Emmys and a Peabody Award during his twenty-five years writing for “The Simpsons”. In 2006, Reiss received a Lifetime Achievement Award from the Animation Writers Caucus. Reiss co-created the animated series “The Critic”and created Showtime’s hit cartoon “Queer Duck”(about a gay duck).

“Queer Duck”was recently named one of “The 100 Greatest Cartoons of All Time”by the BBC. “Queer Duck: the Movie”was released to rave reviews in July 2006. The film won awards in New York, Chicago, Sweden, Germany and Wales.

Reiss co-wrote “˜The Simpsons Movie”and “Ice Age 3” with a combined world-wide gross of $1.5 billion. In addition, he’s been a contributing writer to two dozen animated films, including the five “Ice Age” films, the two “Despicable Me” films, “Rio,” “Horton Hears a Who,” and “The Lorax.”

His caveman detective story “Cro-Magnon P.I.”won an Edgar Award from the Mystery Writers of America. He has published eighteen children’s books, including the best-seller “How Murray Saved Christmas”and the award-winning “Late for School”. Reiss also composes puzzles for “NPR” and “Games Magazine”.

As a professional speaker, Reiss has lectured at over four hundred colleges and institutions, on six continents. His topics include “The Simpsons” comedy and Judaism, and the sorry state of television. Reiss is a former president of “The Harvard Lampoon”and editor of “The National Lampoon”.

Reiss’ first play “I’m Connecticut” was named Best Play of 2012 by both Connecticut critics and theatergoers.

He has been happily married for twenty-six years. Like most children’s book authors, he has no children.

If you’d like to bring in Mike Reiss as your next keynote speaker, please fill out the “Request More Information” form on the right.

Springfield Confidential: Jokes, Secrets, and Outright Lies from a Lifetime Writing for The Simpsons

He was amazing. It was a great experience and Mike was incredible.

Mike was an amazing speaker and the crowd loved him! 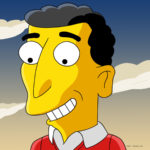 After 29 seasons, fans know a lot about The Simpsons, but they haven’t heard it the way Mike Reiss tells it in his new book, Springfield Confidential: Jokes, Secrets and Outright Lies From a Lifetime Writing ... Read more

“I’ve hit rock bottom. I’m writing for a cartoon.” This was the thought of Mike Reiss when he joined the writers’ room for The Simpsons in 1989. Thirty years later, he’s worked on all but two seasons of the show, ... Read more

Matthew Luhn is a writer, story and branding consultant, creative writing instructor and keynote speaker with over 25 years' experience creating stories and characters at Pixar Animation Studios, The Simpsons, and beyond.

Former Head of Innovation & Creativity at The Walt Disney Company

Leaning on 25+ years of experience with Disney, most recently as Head of Innovation & Creativity, Duncan creates an engaging, immersive keynote that leaves the audience with a unique set of tangible tools they can actually use to embed a culture of innovation and creativity across their own organizations.